Friendship Valley was a Build-A-Bear themed game released for the Nintendo Wii in 2010. It was released alongside a similarly themed Nintendo DS game, Welcome To Hugsville. Both games came with special codes which could be entered in Bearville to unlock some exclusive gifts.


In game, users could choose between 13 different characters to play from and played in a 3D world completing quests, building their own town and more! 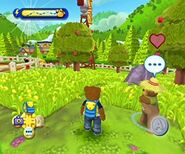 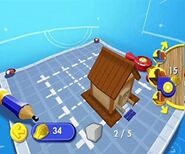